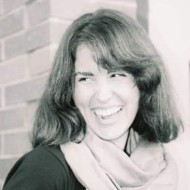 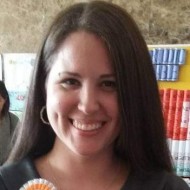 Three pictures of yours truly at three different times in my young adult life. The first photo was a headshot taken during a college production of The Nina Variations, which I co-directed fall semester of my junior year. I’m still proud of that production. The next photo is of me towards the end of my first year teaching abroad. I’m smiling in the midst of an exhibition showcasing my host school’s (and its two sister schools’) many projects from the year. I felt professional and proud of what I’d contributed to the student body (and oh so impressed by my students’ talents). In the last photo, I’m smiling at my firstborn’s sweet face while waiting for church to start. Three smiling faces, three sets of dimples, three different years. The common thread between these pictures is that I was depressed and suicidal in all three of them.

Experts say that drowning doesn’t look like drowning. We have this cinematic idea that drowning is dramatic arm flailing, excessive splashing, screaming, etc., but in reality, a drowning person doesn’t look anything like that, which is why lay people don’t notice when someone is drowning next to them but a lifeguard will spot it across a crowded swimming pool. According to Wikipedia, this is what drowning is actually like:

While distress and panic may sometimes take place beforehand, drowning itself is quick and often silent. A person close to the point of drowning is unable to keep their mouth above water long enough to breathe properly and is unable to shout. Lacking air, their body cannot perform the voluntary efforts involved in waving or seeking attention. Involuntary actions operated by the autonomic nervous system involve lateral flapping or paddling with the arms to press them down into the water in the effort to raise the mouth long enough to breathe, and tilting the head back. As an instinctive reaction, this is not consciously mediated nor under conscious control.

The lack of leg movement, upright position, inability to talk or keep the mouth consistently above water, and (upon attempting to reach the victim) the absence of expected rescue-directed actions, are evidence of the condition.

So what we can gather is that distress is different than drowning. I’ve been in distress in water, and I’ve come close to drowning once as a very young child, and the experiences were quite different. I don’t remember the near-drowning, although I remember the fear of being in trouble in water. The fear was paralyzing, and I couldn’t think of what to do to get out of trouble. Fortunately, in both situations, I’ve been near people who realized what was happening quickly enough to intervene and rescue me.

Let’s circle back around to the point of this post. Depression and drowning are awfully similar, and it’s common enough to see writers describe depression as drowning. You feel helpless in the midst of that kind of depression. You know something’s wrong, but you can’t get outside of your own fear, sadness, or panic to know what to do about it. It’s hard to ask for help when you can’t figure out what’s wrong, and sometimes, you get to the point where trying to tread water is too much and you’re willing to drown just to catch a break.

The first picture of me was taken during my hardest semester of undergrad. I had a full academic load with some especially challenging classes, I was co-director to a student theater production, I worked a part-time job, I was in a floundering dating relationship, and I was in weekly counseling sessions to deal with childhood trauma. So many things came to a head that semester, and I stopped taking care of my physical body (little sleep, too much caffeine, minimal nutritional intake), which contributed to my already crumbling emotional and mental health. I cried. A lot. I listened to depressing music. I withdrew a lot. I started cutting. I thought about how much better life would be if I were no longer in it. I was lucky that my roommate and boyfriend intervened and helped me get the help I needed.

The second picture was taken the spring of my first year teaching abroad. Towards the end of my first semester, my spouse and I discovered that I was pregnant. We made it through the first trimester, announced the pregnancy to all, and found out at 18 weeks that although the baby had died approximately a month before, my body hadn’t miscarried naturally. Needless to say, this was traumatic, as was the subsequent D&C and week-long hospital stay to clear up the infections in my body. Initially, God gave me a lot of peace over the whole situation, but then I questioned everything. Why did this happen? What did I do that caused this? I loathed my body for this betrayal and felt deep guilt and grief. I withdrew again. Nearly all of my free time I spent in some kind of fantasy: books, Netflix binges, writing for my Master’s program. Once again, I debated ending my life, but I knew I couldn’t do that to my husband while in a foreign country. Bizarre logic, perhaps, but that kept me going.

A year and a half later, we had our rainbow baby boy, and I couldn’t have been more overwhelmed. I knew I was at risk for postpartum depression because of the previous pregnancy loss, but I couldn’t have predicted how it came about for me–several months after delivery, and with fits of irrational rage coupled with dark intrusive thoughts. I never wanted to hurt my baby or myself (and I didn’t, thank God!), but I would often have a scene play out in my head of throwing my baby against the concrete wall of our fifth floor apartment then go to the window and jump because who throws their baby at a wall?! In this third example, I reached out to someone in our organization who began meeting with me in person weekly and checking in on me via text throughout the rest of the week until I could see a professional for talk therapy and medication. I’ve been on Zoloft ever since and don’t anticipate weaning myself off the antidepressants anytime soon.

Why do I share this with the internet? Well I suppose the first reason is to explain some of my absence from this blog over recent years, and some of it is to let others who struggle with depression and anxiety to know that they aren’t alone and that help is out there, but I think the biggest reason I want to post this is to let people who’ve never struggled with their own mental health to know that often, a mental health disorder doesn’t look like how you think it looks. Whenever a celebrity dies from what appears to be suicide, I see the same sorts of sentiment circulate on social media: check up on your friends who are struggling. And yes, if you see that your friends and family are struggling, step in and help as they allow. BUT ALSO check in on your friends and family who look like they have it all together. I could argue that I looked like everything was fine in each of those photos above, but I was really drowning and it’s by God’s grace and human intervention that I am still here today.