Back in October, I could not decide if I wanted to attempt NaNoWriMo. I first participated in NaNoWriMo in 2009, where I somehow managed to pass the finishing line before midnight on November 30th. It was stressful, but I did it, and I felt so incredibly proud of myself. Needless to say, I was hooked from then on, and I have since faithfully returned to NaNoWriMo every new November. Each year, I won, and most years, it was a very close finish. However, I was only working during those years, and not trying to balance school, so this year, I just did not know if I should even bother signing up. But then my friends gradually announced their NaNo plans, and some of my coworkers said they were going to do it, and…well, now you know how I got suckered into it for another year.

When I started NaNoWriMo thirty-two days ago, my original plan was to expand on a project I had started but never finished. As I started plugging away, it felt like each sentence was a chore. I don’t really need to recap that again, so long story short, a week into November, I started from scratch*. My new project was a riff off a fanfic I wrote just after high school because I thought, “Why not write something just for me?” There wouldn’t be the pressure to write the next Great American Novel, and I could make it as ridiculous as I wanted. So I took roughly the same narrative frame, changed the setting, axed several characters, and reworked a lot of stuff along the way, and it was wonderful.

Here is what I learned from writing this year:

Now here’s the bad news about this year’s NaNo: I didn’t win. *cue sad trombone* I got awfully close to winning, but come novel verification at 11:59pm, I still had 2,500 words left to make my goal. So close! Understandably, I was a little disappointed, but I was mostly proud of myself. On November 30, I wrote a total of 12,130 words. I did not know I was physically capable of typing that much in a 24 hour period. By the end, I was typing so fast that my fingers were cramping up. It still wasn’t enough for me to win, but man, I’m ok with that. 🙂 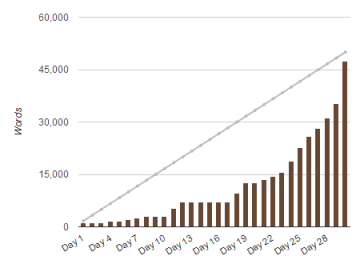 Just look at that last day. Shoot, that last week was pretty monumental too.

On top of my various work commitments–multiple part-time jobs–and grad school–literary theory can go die in a fire–I’m grateful that I had any time at all to write, let alone *almost* write 50,000 words in one month. I guess that means I never have an excuse not to write again. I think that also means that unless I’m 100% in support of a project, I would rather not spend my time and brain energy on it. I still hope to be published one day but not if it means I need to sell my soul for the writing cred**.

So did you participate in NaNoWriMo this year? Want to share your triumphs and downfalls?

*I did not count the words I had already written on this first project with the total words I wrote on the novel that I made my NaNo project for this year, and my husband pointed out that I probably wrote more than 50k this month and that I actually “won” NaNo. I disagree.